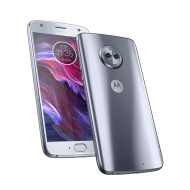 Below is a list of reviews for this or similar products. If you think this grouping is wrong please click here to flag.
Read more on our FAQ’s page.
Showing 1 - 4 of 4 Show Reviews: from Australia | from other countries (160)

6 months later, the Moto X4 is now an even better deal

With many midtier phones having varying reliability, the water-resistant and inexpensive Moto X4 is a lesson on how to do it right.

The Moto X4 is water-resistant, has NFC, expandable memory and dual rear cameras. Motorola's variant comes with tons of useful software tricks. It's a worthy alternative to the Moto G6 Play.

The phone's camera is slow to launch and snap photos. Its wide-angle camera warps straight lines too severely.

Though it can be slow at times, the Motorola Moto X4 hits all the notes for the right price, making it an even better deal now than when it launched.

Moto X4 is amazing in camera quality in all conditions including night. It have got dual rear camera. It is durable and brightness of display is also good. Apart from calling and messaging, I use it for different apps like facebook, whatsApp, etc and...

A good middle of the road smartphone.

The X4 has higher specifications than the Samsung Galaxy J7 Pro, but costs no more or is even less in price. Has a high water resistance rating and is lighter. Only advantage of the Samsung seems to be the standard 2yr warranty, as opposed to only one...