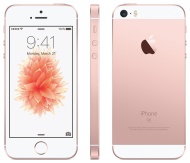 alaTest has collected and analyzed 19348 reviews of Apple iPhone SE. The average rating for this product is 4.5/5, compared to an average rating of 4.1/5 for other Cell phones for all reviews. Views about the portability and battery are overall positive. The performance and usability also get good reviews. Views are divided on the reception. There are some negative views about the text input.

We analyzed user and expert ratings, product age and more factors. Compared to other Cell phones the Apple iPhone SE is awarded an overall alaScore™ of 92/100 = Excellent quality.

Below is a list of reviews for this or similar products. If you think this grouping is wrong please click here to flag.
Read more on our FAQ’s page.
Showing 1 - 294 of 542 Show Reviews: from Australia | from other countries (18721)

alaTest has collected and analyzed 284 user reviews of Apple iPhone SE from Amazon.com. The average user rating for this product is 4.3/5, compared to an average user rating of 3.8/5 for other Cell phones on Amazon.com. Reviewers are impressed by the price and design. The usability and size are also mentioned favorably. There are some critical comments about the reception.

87% of the reviews on Amazon.com give this product a positive rating.

We reviewed the iPhone SE again

If you're not waiting it out for the iPhone 8, the little SE is the best choice for a basic more budget-friendly iPhone.

The iPhone SE is one year older, but its added storage options and strong performance running iOS 10 still makes it a great choice for small-phone fans.

The iPhone SE looks like an old iPhone. Sounds boring, huh? But this isn't a phone to show off. It's a phone to go undercover with. It's got nearly all of the same upgraded specs as 2015's top-end iPhones -- the 6S and 6S Plus -- jammed into an iPhone...

Selfie cam doesn't get a megapixel upgrade, and there's no 3D Touch. Older design, while still good-looking, is exactly like the older iPhone 5S. Mid-year release means another iPhone might be coming sooner than later

While the rest of us wait for the iPhone 7 later this year, the iPhone SE is a great choice for small phone fans looking for an 'iPhone 6S Mini.'

If you've been doggedly clinging to a now-battered iPhone 5 or iPhone 5s and steadfastly refusing to embrace the new generation of big-screen phones, then the Apple iPhone SE should make you very, very happy. It's your dream made reality: a retro-sized...

This article originally appeared at alphr.com.

Apple is taking a step back in time with its latest phone, the iPhone SE – hailed by the company as "the most powerful 4‑inch phone ever". Looking for the best smartphone? See our latest smartphone reviews .

Aussies looking to wrap their hand around Apple's new smaller iPhone SE will be hit with a hefty 'Australia tax', with local pricing around 17% more than the US equivalent. The 4-inch iPhone SE will start from $679 in Australia for the 16GB Wi-Fi only...

This phone is the BOMB!

I love love love my iPhone SE! It has all the features of the newer models but still in the compact style of earlier models. I have had no issues with hardware or software and the case that I also brought from the Apple store and protected in through...

I bought for my husband as he is not a heavy user on phones. He only needs the phone sometimes for google map, for social app and that is all. So I chose this small phone for him. It‘s easy to carry in pocket. So far it's still running quite smoothly...

When Apple came out with the bigger iPhone 6 Units, they were simply too big for my palm as well as for my pant's pocket. The SE is the same size at the iPhone 5S (previous phone) and I love the feel of it as well as it isn't plastic unlike the iPhone...

My best ever phone!

I don't think I could manage without this phone. It is so stylish, so functional, and so very capable. The two things I really appreciate on a smartphone are camera and battery life - the iPhone SE delivers in both respects. I like that it has...

I purchased my iPhone late last year, from an iPhone 5 to an SE, the difference is great, way faster, better screen, everything the same as an iPhone 6 but the size of a 5. Highly recommend anyone looking for an updated version of this particular...