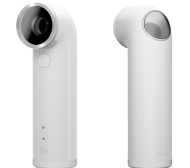 alaTest has collected and analyzed 293 reviews of HTC RE Camera. The average rating for this product is 3.7/5, compared to an average rating of 4.0/5 for other Camcorders for all reviews. Views about the portability and image quality are generally positive. The reliability and size also get good feedback. There are some critical views about the viewfinder and battery. Comments are divided on the price.

We analyzed user and expert ratings, product age and more factors. Compared to other Camcorders the HTC RE Camera is awarded an overall alaScore™ of 93/100 = Excellent quality.

Below is a list of reviews for this or similar products. If you think this grouping is wrong please click here to flag.
Read more on our FAQ’s page.
Showing 1 - 42 of 42 Show Reviews: from Australia | from other countries (67)

100% of the reviews on Amazon.co.uk give this product a positive rating.

alaTest has collected and analyzed 36 user reviews of HTC RE Camera from Amazon.com. The average user rating for this product is 3.0/5, compared to an average user rating of 3.9/5 for other Camcorders on Amazon.com. Reviewers really like the design. The price also gets good feedback. Many are negative about the battery and size. Views are divided on the portability.

61% of the reviews on Amazon.com give this product a positive rating.

The HTC Re isn't anything that didn't already exist in one form or another. It's basically an heir to the Flip-style minicamcorder or, more accurately, the pistol-grip Sanyo Xacti dual-cameras and a cousin to current POV action cams.

The HTC Re is a small, simple point-and-shoot video camera that's ready to shoot when you pick it up. It's waterproof to 1 meter without a housing, and its built-in wireless and the Re app let you see what you're shooting as well as view and download...

There is noticeable shutter lag. Its video and photo quality aren't significantly better than a smartphone and audio quality is poor. Its battery isn't user replaceable or removable. Its shape is great for holding, but the body is a bit slippery

The HTC Re's features might not be as unusual as its design, but it's still a solid little camera that's easier and faster to shoot with than your average smartphone.

Innovative HTC has made a point of focussing on photography with its range of smartphones. Over the years, the Taiwanese company has introduced smartphone cameras that take 3D photos, work well in low-light situations, and can even change the point of...

Price comparison for HTC RE Camera